We always sang this song when we were taken to Regimiento Arica. That was a torture centre.

On our departure and return, the female prisoners who remained behind also sang the song. The lyrics were a collective effort, it was like our anthem. It was fun and we really liked it.

We had a kind of implicit code that prohibited us from crying or getting depressed during the day. At night, in our cells, we’d cry, but not during the day as there was always an older woman looking over you. We called the older women 'mum'.

My parents couldn’t come every time we were allowed visitors because they lived in Santiago. My friends would say, 'Cecilia, laugh at anything when you’re with your parents. Later, when they leave, ask the nun to open your cell and howl into your pillow, but as long as your parents are here, you have to act fine.' And that's what we all tried to do.

It was compulsory to go to mass. We smartened ourselves up to go, because, although we were behind bars in the church, in front of us were our families who had come to see us.

This prison had been a children's home before. It was run by the Congregation of Our Lady of Charity of the Good Shepherd. People always said that these were 'good' nuns. I don’t know if that’s the right word. It sticks in my throat that consecrated nuns should be able to accept female political prisoners.

'It's because they were forced to' was the reason they gave us. It was very unpleasant when I went into the bathroom and the nuns stood there looking at me. It felt like torture. It’s terrible to be in prison.

Once in a while, they would get excited when we sang and would sing along with us, but I can't lose sight of the fact that they could have refused to receive political prisoners. 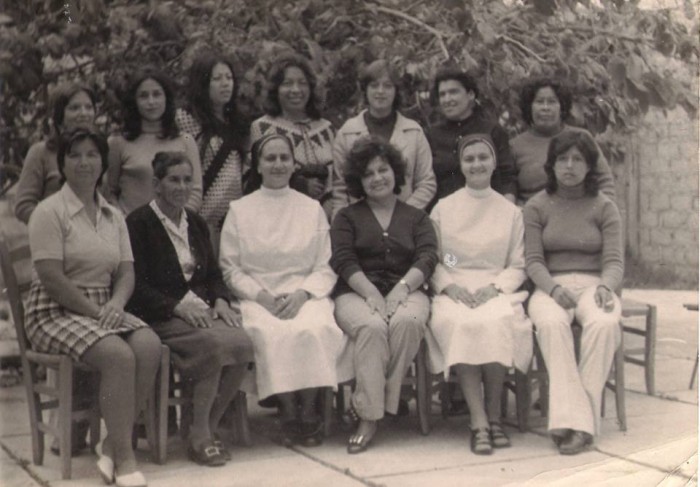 I remember when I was young girl
I was arrested for acting foolish
as part of a group of good-looking women,
who knew how to sing.
And to make our lives more beautiful
we’d go out and sing
a lovely little song that sounded
like a heavenly song.

And when they took us to see the prosecutor
we started to tremble
to see so many angry soldiers
that made us shiver.
But returning to Buen Pastor is something else
because we can count on
the good mother 'Doña Eufrasia'
who comes to comfort us.

If we ever get out of this sombre fix
we promise them we’ll change
we’ll help the military junta
with our modest work
and we will be like brainless birds
without speaking, without thinking
to make this land more beautiful
helping to patrol it.